The Chorus moved like figures on a musical jewellery box – stilted, mechanical, hieratical movements, not in unison, but repeating the same moves in any one speech. They sang most of the lines, even when in dialogue with Electra. The effect was slightly eerie; they looked like mechanical dolls. The reversal of conventional placing of the Chorus in the Orchestra – by exiling them to the periphery – meant that the central playing circle became a claustrophobic space, watched, or guarded by, the observing Chorus. 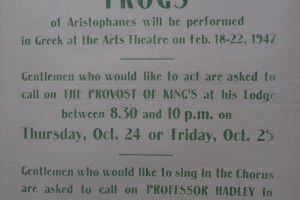