We caught up with director Helen Eastman soon after her suggested plays were accepted by the committee. These were her first thoughts:

Prometheus is one of the foundation myths of our culture, exploring what it is to be human and our relationship to the natural world. The play will work particularly well in the original language, due to its strong dramaturgy, visual iconography and the incredible sound-world which Aeschylus’ lyrics create. Composer Alex Silverman and I worked on the dramatic potential of blending song, speech and metre in my production of Agamemnon in 2010 and we hope to continue that work in this production, carving a line between theatre and opera and taking our cues from Aeschylus’ verse. With the trend in British theatre to European chorus-work, inspired by Lecoq, there’s never been a more interesting time to be developing a chorus with students, bringing together physical theatre practice with the original Greek texts.

I look forward to working with them to create something dynamic, fluid and expressive, drawing on Aeschylus’ metaphors. We want to pair this tragedy with an abridged version of Aristophanes’ Frogs, to make the evening reflect both sides of the Greek dramatic culture. The production will be packed with visual comedy and contemporary satire, and play with the relationship between performance and surtitle. We hope it will be riotous, anarchic, fantastical, and a suitable tribute to the spirit of the original. 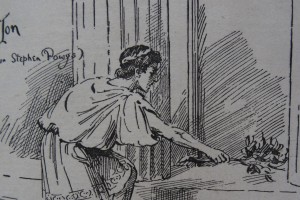