Interview with the Composer of Prometheus and Frogs

Interview with the Composer

At the beginning of September 2013 we asked the composer, Alex Silverman, a few questions about his role in the production.

Q.: First, tell us a bit about yourself.

A: I work on putting live music into shows – a wide variety of them. I’ve done a lot of work with the Globe Theatre, where live music plays a key role in telling stories - you can’t use lights or sound to show when a scene is over, or the sun comes up, for instance, but you can use music to help the audience follow the story around the stage. Or, something completely different, earlier this year Helen [Eastman, the director] and I did a show called Bicycle Boy in Oxford, which was about renewable technology, and aimed at 7- to 11-year-olds. But it’s the same job whether it’s a cycle-safety disco number for two men on a ukulele and a unicycle, or a chorus in Prometheus with ten voices and ten instruments: I aim to use live music to get the audience into a vivid story.

Q: What’s your background with ancient Greek, and what’s special about doing a Greek Play?

A: I didn’t do Greek at school. Initially, I applied to Cambridge to read Russian, then got cold feet just before arriving, and switched to Classics. I learnt Greek here from scratch, in fact with some people who are still in the department and still involved in the Greek Play. That was my introduction to the thing I’m most passionate about as a musician – the verse, the rhythms, the organisation of ideas. It might be that I wasn’t concentrating at the time, but I don’t recall as an undergraduate getting up close to the rhythms and metre, that’s to say the music, of Greek poetry. We concentrated on the meaning, interpretation, the bigger cultural picture – all of which was very interesting. But Greek plays contain wonderful combinations of rhythms which we’re just not used to in modern poetry (by which I mean poetry from the last 500 years!). Even where Shakespeare does mix up his verse-forms in a play like A Midsummer Night’s Dream, you don’t get the variety of rhythm within a few lines. What’s more the way the verses are put together rhythmically has a profound physical effect on the rate at which the actor can deliver the lines and ideas. Another thing is that, for example, the opening chorus of Agamemnon [the 2010 Greek Play, for which Alex also composed the score] is a 12- or 13-minute musical number, which I don’t normally have the chance to write in a play. I therefore have to find new techniques for dealing with that, and they feed back into my practice in my other work too.

Q: Is there any sense in which you’re aiming at an ‘authentic’ musical sound?

A: If we were to expend a similar amount of money and effort on an experiment in being authentic, I’d be intrigued to contribute. But that isn’t what we’re doing in putting a play on in the Cambridge Arts Theatre in 2013. Having said that, I do start with the metre. The reason is, I think, that it’s inextricable from the words, which are the basis of doing a Greek Play. So scansion is the first thing that goes on the page, then I think about what the rhythm and pace are, and the movement within that. That’s a rich resource to start with, as a composer. There are times when I’ll decide to ignore it, and others where I’ll spot something exciting and try to amplify it.

Q: A big chunk of Frogs involves a contrast of two musical styles – those of Aeschylus and Euripides. Is that a gift for you?

A: Yes, but it doesn’t solve everything. Our challenge in Frogs is to present an ancient comedy which is funny. There’s a reason there aren’t many French stand-ups working in Britain: translating jokes is hard. But Helen and I have worked across a range of physical theatre and comedy, which gives us a range of modern techniques to draw on. Some of the musical humour is easy. For example, Helen’s son’s favourite song involves a performer taking any nursery rhyme and adding the ending ‘…and covered him in custard’. That’s a musical joke which is already there in the same form in Aristophanes’ Frogs. On the other hand, when Aeschylus sings a long parody of Euripides’ music, Aristophanes could make that a joke because the audience got the parody, but it isn’t funny if the references aren’t in fashion. Our references, if we want to raise a laugh (which we do), have to be updated.

Q: You haven’t by any means arrived at rehearsals with a fully written-out score. Why do you like to continue your composing as rehearsals are in progress?

A: The score, in my way of working, has to respond to the performers. In every single project I write pages and pages of music for a scene, and in the final rehearsals we decide it’s too long and all that work goes to waste; conversely other bars have to be scribbled down and added in a final technical rehearsal. That makes it quite a frantic process, but it’s essential. There’s quite a lot in place already (including the rhythm of every line, for example), but over the next few weeks the score will mushroom as we try things out and see if they work. It’s like the design growing from Neil Irish’s first sketches to the detail that’ll be there in the show. I work a few days ahead of what’s going on in the rehearsal room. We’ve so far only spent a couple of days with the performers. They’re cast not just on the basis of what they can do at the audition, but how we think they’ll develop during seven weeks of rehearsing. And the exciting thing is that some people will be able to do things with their voice which they didn’t present at their audition, and which neither I nor they can predict yet.

Q: Given that answer, can you give us any hints about what sort of sound-world you have in mind?

A: One thing you can expect, of course, is a lot of vocal music. For example Prometheus will have a chorus of ten female voices, who will sing almost all their lines. The rhythms I’ve been talking about will be kept lively by percussion. Then I’ve got effectively one-and-a-half bands. I have a reputation for loving the trombone – it’s such a versatile instrument! – and this time too there’ll be some of that. Frogs will have a brass quintet up on stage, which can give energy and a bright, brash sound for comedy. But it will also be the heart of the orchestra for Prometheus, which will be off-stage. Musically that will continue with the techniques and colours we explored working on Agamemnon, where I used a mix of low brass and high strings, though the band this time is slightly bigger. The central scene of Prometheus, with Io, will be a musical focus. In Agamemnon the Cassandra-scene has a rather similar shape. We made that very operatic, and cast an extremely talented singer as Cassandra. But we don’t just want to repeat that. It worked in Agamemnon because the scene is about a language-barrier and, when the whole audience already doesn’t speak Greek, letting her sing in a unique style was a good alternative way to make the point. Io is rather different: at the moment, I’m writing a long solo cello accompaniment to the scene, and working out how to express her situation – being chased around the world by an insect – without wanting to have a lot of literal buzzing noises. The key thing, as always, will be to keep the scene lively for as much time as it takes to tell Io’s story. 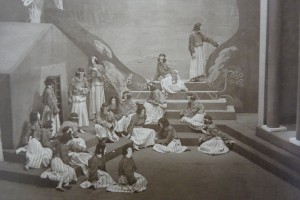