The last time Antigone was performed in Cambridge was in 1959. This was a revolutionary production: the traditional classical white chitons and columns were abandoned, and we appeared against a background of buildings copied from Cnossos, and wearing costumes designed from the frescoes there. We were taken back to the world of pre-Classical mythology, a daring concept that hasn’t, I believe, been attempted since. I remember the gasps of surprise when the curtains went back  -  as well as those irritating points of light from torches as scholars followed the text. No surtitles in those days. 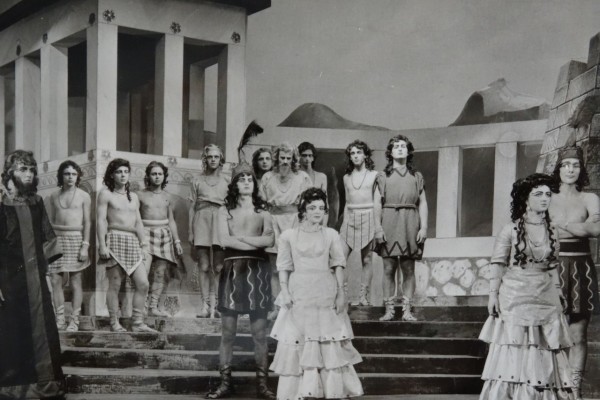 I don’t remember much rehearsing. All the cast were reading Classics, so we were expected to understand what we were acting. But the lovely music by Peter Tranchell did take a lot of practice, especially the kommos at the end with Antigone. Our producer suddenly decided that Antigone and Ismene should alternate parts, which meant an enormous amount of learning for us both; but somehow we managed it. The sheer glamour of the production carried us all along. We women wore brilliantly-coloured dresses, with large sequins glued on to flounced skirts, and flesh-coloured modesty vests over our bosoms. Haimon was stunning in a turquoise loincloth and an ostrich feather headdress like the famous frescoed priest king, and everyone wore dramatic make-up and long curly wigs. It was all hugely enjoyable!

I cherish a strange personal link in the Greek Play tradition  -  a copy of The Wisdom of Sophocles by J.T.Sheppard, later Sir John Sheppard, Provost of King’s College. It is inscribed “For Miss Antigone Ismene Isabel Lawson, with the author’s best wishes.He had played Peithetairos in The Birds in 1903, 56 years before he came to see us in Antigone. Now there’s a curiosity. 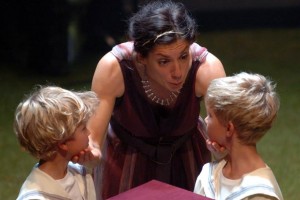