A View from the Surtitle Box

As the dust settles on the 2016 Greek Play (Antigone/Lysistrata), I and the 5000+ other people lucky enough to have snagged a ticket to this sell-out performance can’t stop singing the praises of the cast. Natasha Cutler was a powerful and natural leader as Lysistrata, and she made speaking Ancient Greek look stylishly effortless.  Rosanna Suppa and Hollie Witton brought to life the belly-laugh-hilarious characters Stratyllis and Calonice, whose characterisation was just spot on. On the other side, Evie Butcher and Kaiti Soultana gave hauntingly sincere and moving performances as Antigone and Ismene, as did Jack Hawkins whose operatic counter-tenor Teiresias had a very real supernatural air of intrigue. And Orlando Gibbs had the unenviable task of playing all in one evening King Creon of Thebes, and Donald Trump of Texas – and did so absolutely faultlessly. But to be honest, each and every actor who tread the Grecian floorboards this week shone in their own way, and I have no doubt that any of them could quite conceivably be the next Tom Hiddleston…Of course, not to forget that none of this would have happened without the blazingly sharp minds of director Helen Eastman and composer Alex Silverman, who remain the friendliest and most supportive creative duo I have ever known, and for whom the label ‘genius’ is not really enough.

Last night, I was lucky enough to speak to Douglas Cashin, a guest of the Greek Play who had starred as Tiresias in Cambridge’s previous Antigone Greek Play production in 1959. He told me about how different the performances are today – not least of all in terms of their ambition, and the sheer volume and range of musical styles which the actors are required to tackle. But one of the major differences is the availability of an English translation to the play. In 1959, the audience all filed in the Arts Theatre with a torch in one hand, and a Loeb text in the other. Eyes flicked between the action on stage and a poorly lit manuscript, surely a rather droll and migraine-inducing experience from the sound of it. In 2016, the audience are offered a quite different experience: a rolling translation displayed on an LED screen built into the stage (‘surtitles’) allows the audience to effectively watch the action and the text simultaneously – and no doubt this kind of technology has had a massive effect on the access and outreach power of the Greek Play and the sell-out audiences which it brings in.

My own love-affair with the Cambridge Greek Play began three years ago, when I was cast in Helen Eastman’s 2013 production of Prometheus/Frogs (leeks and all). Although I was due to be around in Cambridge again for the 2016 play, my summer travel plans meant that I couldn’t make the intense six week rehearsal period/boot camp, so I gracefully bowed out. But by chance I was sat next to Dr Katherine McDonald – one of the show co-producers – at a conference in May, and she gently manoeuvred the conversation towards how great Antigone and Lysistrata were going to look, and the fact that she still needed crew members who had a knowledge of Ancient Greek, and I’d always wanted to give surtitling a go, right? I agreed, but on condition that I got to do the comedy! 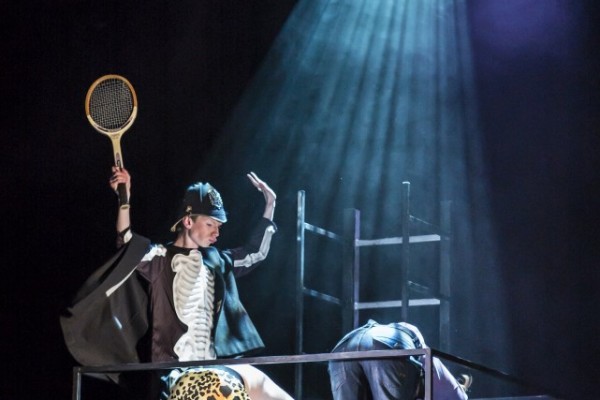 I suppose the job of running the surtitles might seem quite easy. Sit in the tech box, hit the ‘space bar’ to roll the next line, and hey presto the job’s a guddun. One of the unique challenges presented by the comedic half of the show is that probably a good 50% or more (he says modestly) of the jokes came through the translation, as a way of decoding some of the more hilarious lines of Aristophanes for audience members who aren’t fluent in Ancient Greek. I joined the rehearsal process in more-or-less the final two weeks, and had to quickly get used to the rhythms and shapes of the gags which the actors had been preparing for another four weeks – to make sure that the punchline always landed in the right place. Another major challenge was to let the actors guide the way, but still keep up with the punchlines. As amazing as the ensemble were, Ancient Greek was surprisingly no one’s first language, and occasionally the odd line did get skipped. The idea was then to keep the translation up to speed with the lines, but also arrive at the next punchline when the actors did, and also make sure the audience didn’t miss any essential plot points… And all of this among the usual flurry of last minute cuts and rewrites as we headed towards opening night. Yes, it did mean that we were in at 8am on the opening day of the performance to make sure that everything was going to line up. It turned out during the dress rehearsal that I was missing two pages of script, and that I had translation for lines which no longer existed and vice versa… 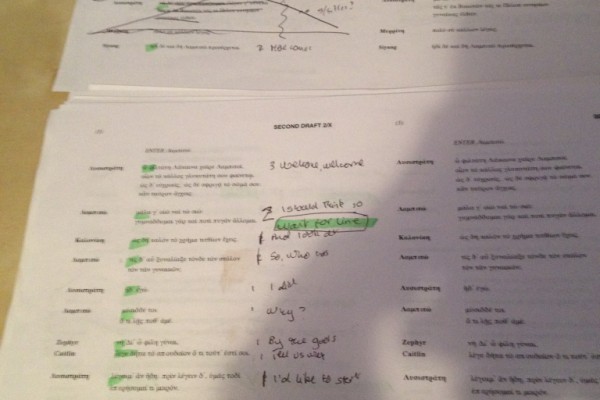 Some of my favourite lines to run (and the ones which I knew would always land a good laugh) were the more meta of self-aware references, those which perhaps took a few liberties with Aristophanes’ text. For example, there wasn’t a single performance where we didn’t get a round of applause for Boris Johnson’s (sorry, the proboulos’) opening speech which was translated simply as “rah, rah, blah, blah, misogyny, rant, rant, bloody women, rah, rah, blah, blah, more misogyny…”

More audience favourites included those times where we broke the fourth wall: “Yes, I’ve checked the Loeb, that’s definitely what it says”; “I’m not translating that, there are school groups here”; and of course “lion-on-a-cheesegrater-position? Full scholarship to read Classics at Cambridge to anyone who can demonstrate that position”. The translation was direct from the brilliant mind of Helen Eastman, with assistance from assistant directors Rachel Tookey and Gareth Mattey. However, each day new material was added to keep the play politically relevant (it was almost as if Trump knew there was someone out there lampooning his every word), and we brainstormed new jokes as we discussed what had worked that day, and what hadn’t. The Brexit joke in the map scene and the Grease reference were mine. Unfortunately my Bake Off gag was vetoed by Helen, and “This. Is. Athens.” never made it in either. The surtitles both helped the performance flow, but also provided a new platform for joke telling – a sort of ‘Aristophanes+’. 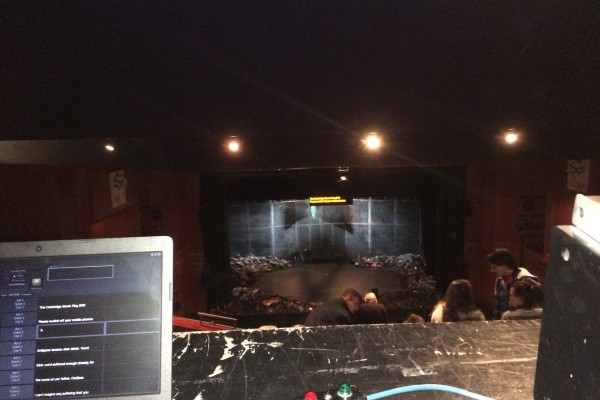 Overall, I had a really fantastic experience up in my surtitle box, and am delighted that I could play a small part in enhancing the wonderful work of the ladies and gentlemen of the cast. It was a pleasure to work with Helen and Alex again – no one quite gets ancient theatre like them, and I really sincerely hope Cambridge hasn’t seen the last of them. And given the average lifespan of a PhD project, perhaps I will also still be clinging on when the next triennial play rolls around…see you all in 2019?! 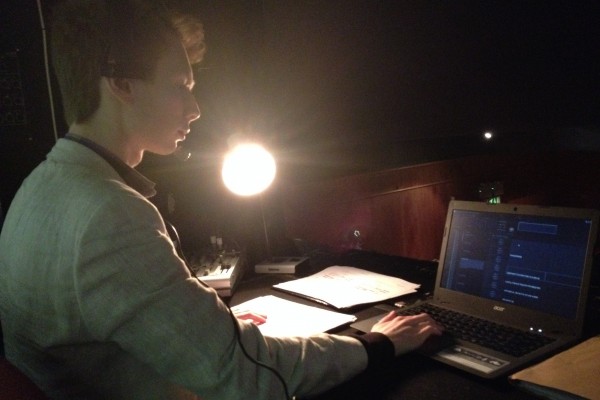 This was originally posted on Res Gerendae, the Cambridge Classics Graduate Student blog, on 16th October 2016. 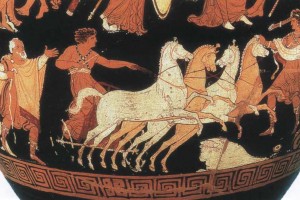